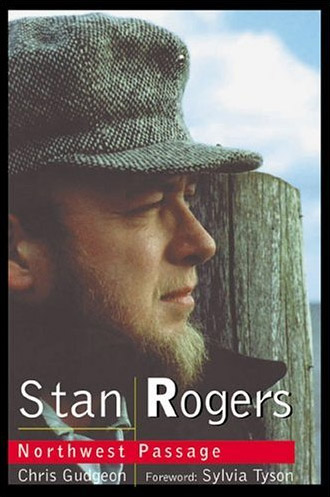 Chris Gudgeon is a celebrated author from Victoria, British Columbia. Northwest Passage (originally titled ‘An Unfinished Conversation: The Life and Music of Stan Rogers’) is a wonderful collection of stories, memories, and facts on Stan’s career and the people in his life.

The genesis of the song ‘Northwest Passage’

Stan knew that he wanted it to be another a capella chorus song. Every album except Turnaround had one, and, besides, they were fun to do. But it was down to the wire, the night before the recording session was to end, and Stan still didn’t have anything on paper. As Stan later recalled in a 1982 radio interview with Howard Larmen,

I was helpless with fatigue at that point and I remember at one point I was lying on the floor of the studio looking up. Everyone else had gone to bed and I was completely alone in the place and I was lying there and I could hear the sort of machinery cooling, that had been heated up duringthe day, some sort of electronics. I could hear the cabinets sort of cooling or clicking or something and just dead silence, and I started thinking about the silence of the north and what John Franklin must have felt on that last fatal voyage of his, where he got so close to breaking through and he would have been the first man through the Northwest Passage, but instead he and all his mem and both ships were lost and it was kind of a terrible saga…

…The next morning at breakfast, producer Paul Mills asked Stan if he had a title song yet.

“We got to finish today or else,” Paul said.

Stan, still groggy from a lack of sleep, shrugged. Yeah, it was finished, he said, then, at Paul’s prompting, sang it right there at the kitchen table, reading the words off a piece of paper.

Stan raised his head at the end of the song to see Paul crying. “That’s a very stirring and solid piece,” the producer said, pulling himself together. They went straight into the studio and recorded it. The album had its title song – and Canada had what may well be the greatest song ever written about this country.

From the back cover

“Stan Rogers was to Canada,” veteran folk artist Tom Paxton has remarked, “what Woody Guthrie was to the United States.” When Peter Gzowski was host of CBC Morningside, he asked listeners to nominate a song as the “second” national anthem of Canada. The winner was Stan Rogers’ classic ‘Northwest Passage’, recorded two years before his death in 1983. When Geist magazine launched a campaign to have Stan Rogers inducted into the Canadian Music Hall of Fame, over 10,000 readers responded in support. A Canadian national hero and an international folk legend, Stan Rogers instigated the Celtic music renaissance in North America, performing his Maritime-style music on the folk circuit from Cape Breton to San Fransisco, from the Artic Circle to the Rio Grande River. His songs ‘Barrett’s Privateers’, ‘The Mary Ellen Carter’, and ‘Northwest Passage’ have become folk standards.

A diet of Mozart and Hank Williams

Stan Rogers liked to say that he grew up on a diet of Mozart and Hank Williams. When he was a kid in a rural area outside of Hamilton, he listened to Classical music, largely at his mother’s insistence, and to country and western, the music his father and uncles preferred. As an adult, Stan’s music was a curious – and unprecedented – hybrid, blending the drama and scope of Classical music with the melodrama and raw emotion of C&W. It creates a wonderous tension. Listening to a Stan Rogers album, you wouldn’t be surprised if he all of a sudden began yodeling Beethoven’s Fifth Symphony.

This dessert, one of Stan’s favorites, comes courtesy of his aunt June Jarvis. She explains the significance of the name: “The idea is that you eat so much of it that all you can do is push your bowl away and grunt.”

1. Mix 3 parts blueberries (fresh preferred) to 1 part white sugar.
2. Cook on low until sugar is dissolved and berries are boiling.
3. Drop spoon sized blobs of sweet biscuit dough into the mixture, just like adding dumplings to a stew. Add two blobs per serving.
4. Cover. Cook on low heat for 12 minutes.
5. Serve, just when cool enough to eat, with cream or vanilla ice cream.
6. Eat until full. Then grunt. 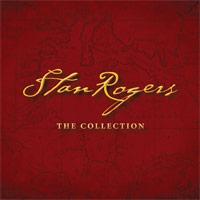 One Warm Line – The Legacy of Stan Rogers – Special Edition DVD, includes a newly-enhancedversion of the original film with never-before-seen special features

A mix of roots & contemporary styles, including tracks Jeannie C., So Blue, Song of the Candle, and cover of Archie Fisher's classic Dark-Eyed Molly.

Between the Breaks... Live!

Includes high-energy songs like Barrett's Privateers and Mary Ellen Carter as well as poignant ballads like Harris & the Mare and First Christmas.

The prairies and north are represented here with Field Behind the Plow, Canol Road, and the title track, which is regarded by many as Canada's "other" national anthem.

Stan explores the area and history of Ontario and the Great Lakes region with songs like White Squall, MacDonnel on the Heights, and the powerful Lock-keeper.